skip to main | skip to sidebar

Day 1 : Hit the ground running
As we walked out of the Siam Reap International Airport arrival gate, we were greeted by throngs of tour guide/hotel personnel waving the namecards of their guest. Due to overlooked the time zone difference, our tour guide was nowhere to be seen as we hv told him we will arrive at 11am but actually that will be an 1hr later. While waiting, a few tour guides who could not find their guests approached us in an oh-so-very polite manner to which we clarified in oh-so-very polite way as well. =) After a while, Mr Heunh (will be calling him Mr H in future) approached us and introduce himself. We carried our bags and head to the green van waiting at the parking. A huge relieved indeed! 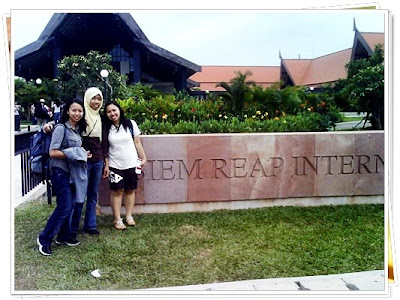 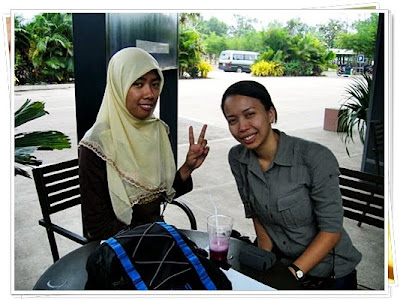 Once in the van, Mr H, a professional tour guide, start narrating about Siam Reap history and geographical location. He speaks very fluent English! Along the way, we noticed that bicycle is the main form of transportation and the cars is driven real slow while motorcyclists don’t really wear helmet except for Tuk Tuk driver! We reached Angkor Star hotel which is in the city, checked in (nice room with 3 singles bed!) , rest for a while and return downstairs to recap our itinerary with Mr H. The first thing to do is MAKAN!! After rounds of searching for Halal food, we settle for nasi Briyani at an Indian restaurant. Nyummy! 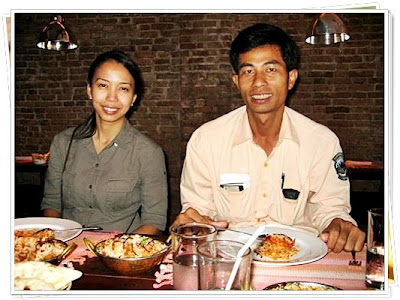 Wood and Stone Carving Center (Artisan Angkor) was the first place to visit. Accompanied by a tour guide who speaks fluent French and Spanish beside English (!!), we were walked thru the background of this institution. We then make a round visiting the students finishing their tasks (some of the students are deaf/mute) , and ended the tour at the souvenir shop of course. I bought a “kipas” for 4 dollar. Later, I found out that it was sold for 1 dollar at the market. But I don’t really mind anyway… as the tour is for free…. :) 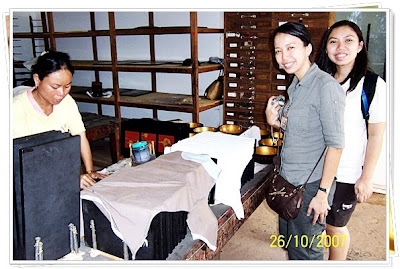 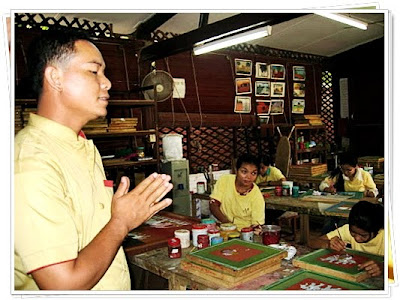 Next is Floating Village! It's a long way as we need to past thru many villages and lakes. Along the way, we noticed that their version of mamak stall is a small shop with big compound filled with “buaian gantung” which is very cool relaxing place. There was a special religious celebration on that day. Many people seen climbing the stairs to the top of the hill for prayers. There is also a small fun fair at the bottom of the hill. We then made a stop and get on the boat which cost 15 dollar per person. Saw a kid who hv a snake coiled around his neck. He kept saying "1 dollar" while his mother points to the banana. =( 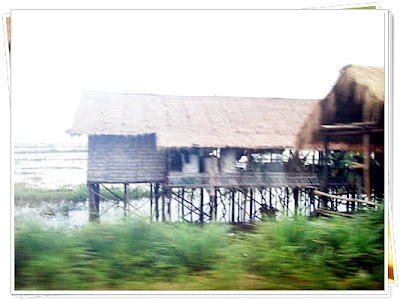 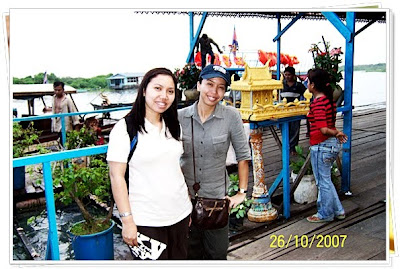 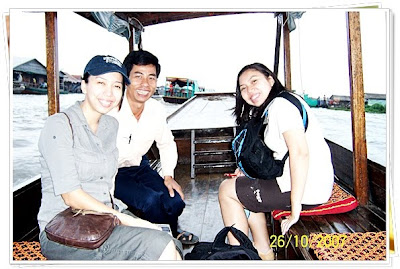 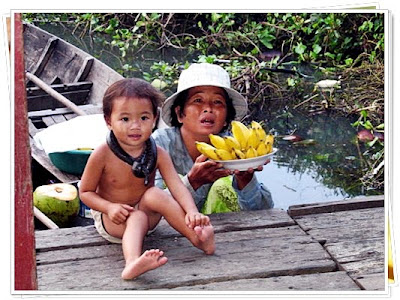 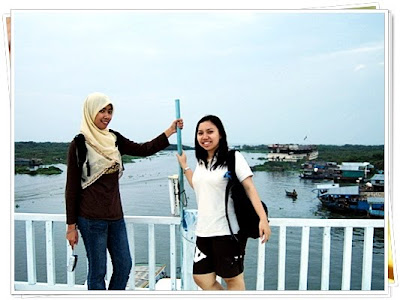 Despite the promise we made with Mr H to depart at least at 5am, we are ~20mins late. I still feel sleepy as we climb into the van. We stopped at a place to buy tickets(dun remember where, TBD) and after quick calibration to buy a 1 day ticket(20USD for 1 day, 40USD for 3 day, 60USD for 1 week) we head to the first destination - Angkor Wat. It was still dark as we passed a big lake. After the van made a stop, only did I realized we have reached to one of the 7 wonders of the world. Yeay!! We are here! We are finally here! 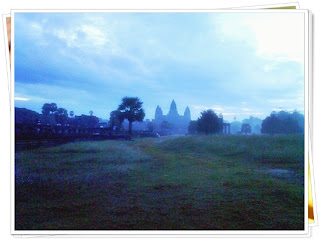 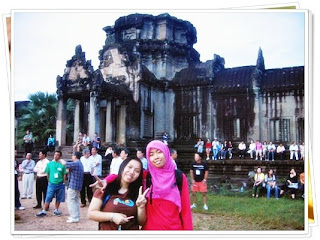 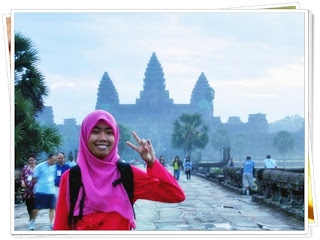 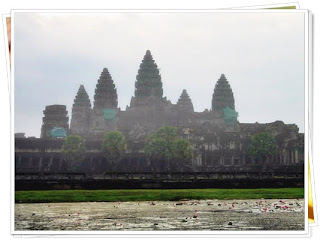 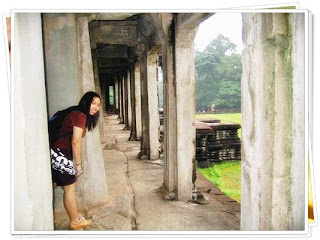 As we made our way inside, Mr H starts to narrate all the stories. Along the way, we passed many groups of tourist lead by their tour guide. Personally, I was attracted with the Cambodian tour guides who speak fluent Japanese. Kawaii!! 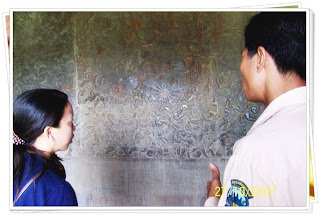 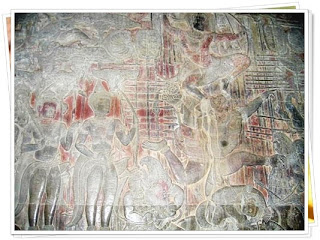 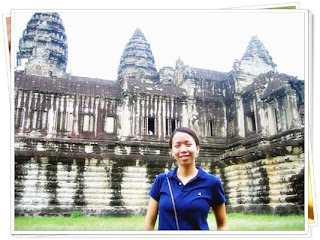 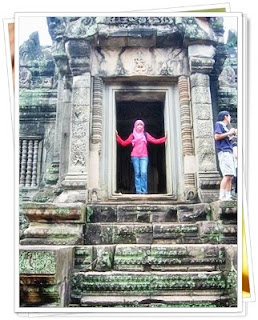 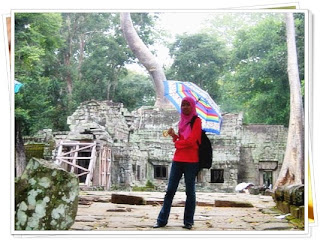 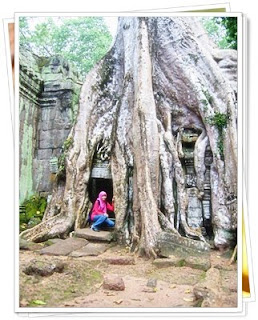 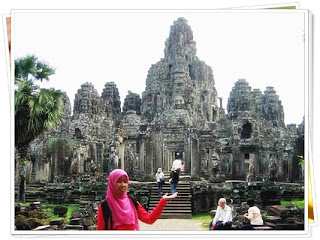 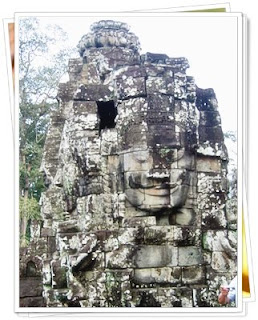 Shop Till You Drop